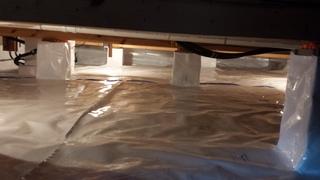 Frontier Basement Systems did a great job from the first phone contact all the way through the final scrap being cleaned up from the job.  Brian and his crew showed up as promised, informed me of everything they were going to do and periodically asked me if everything was meeting my expectations.  He and his crew were courteous, worked very hard and made sure everything was to my satisfaction.  I don't mind admitting that I am expremely particular and want everything done neatly and thorough.  When this job was done, I was 100% satisfied.
Daniel C. of Lafayette, TN
It's not my primary residence, but when I  left a day after they finished the job my wife and I were extremely pleased with the job. Fernando's work was clean, precise, and professional. He cleaned up his mess and left the work site as clean as it was before he arrived.
Brian E. of Scottsville, KY
Tuesday, January 8th
The technician was very nice, he cleaned up real well. We were very impressed. We always recommended your company to anyone we have talked to that may need your services.
Bill B. of Alvaton, KY
Wednesday, June 12th
We had the clean crawl space put in, along with a water pump feature. The crew was timely with the work and very knowledgeable. I would use this company again but mostly because of the staff. Our foreman ensured we were as comfortable as possible as the work took place and they cleaned up after they put our system in. I definitely would recommend you use this company for all your basement needs.
Chisa W. of Bowling Green, KY
Tuesday, October 27th
"They were so great and very thorough! So thankful!"
Amanda W. of Bowling Green, KY
Monday, October 28th
Very happy with the appearance and how professional the installers are. I will definitely recommend them.
Jason L. of Bowling Green, KY
Thursday, October 31st
Ronald H was really impressed with Manny; saying Manny was really professional, he called when on the way, he walked through everything with him, and was really considerate of the him.
Roland H. of Westermorland, TN
Tuesday, January 23rd
Very satisfied with the work and the job!!!
Fred B. of Bethpage, TN
Thursday, November 21st
Total testimonials : 159