How to Choose a Basement Dehumidifier

Moisture in a basement can lead to mold growth and cause rot. Use a Dehumidifier to prevent damage.

For homeowners with basements, humidity can cause hidden damage. 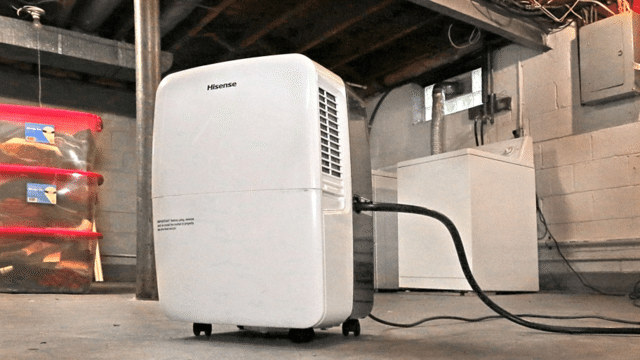 "A homeowner should get a dehumidifier for their home when the (relative humidity) is above 50 percent," says Jason Yacko, sales manager for Bix Basement Systems in Fort Madison, Iowa.

Generally, experts say you want to keep relative humiditiy in the basement no higher than about 50 to 55 precent. "A good dehumidifier protects your structure against wood rot and prevents mold and bacteria," says Danny Harrell, a basement inspector at Tar Heel Basement Systems in Winston-Salem, North Carolina.

Here's what to look for when buying a basement dehumidier to dry out that subterranean air - much of which seeps upstairs, too.

Size the dehumidifier for your space

Rather than rely on a small unit made for a single room, take into account the square footage of your entire basement. Align that with the dehumidifier's so-called pint removal capacity (pints of water it can remove from the air in a 24 hour period), and the level of moisture in your basement.

For example, a damp 2,000-square-foot basement that exudes a musty smell may be best served by a dehumidifier that removeds about 22 to 25 pints of water from the air per day, while larger, wetter spaces likely require a dehumidifier than can remove more water.

Be sure to repair any leaks that may bring moisture into the home.

Opt for a dehumidifier with automatic draining

"Find a dehumidifier (for which) you don't have to empty the reservoir," says Dianna Gallen, Marketing coodinator for BQ Basement System in Erdeheim, Pennsylvania. This helps to guard against collected water spilling out onto your floor.

Some units can pipe water to a drain in your basement. However, if you don't have a floor-level drain, look for a dehumidifier with a pump that allows you to push the water up, such as a sink in the basement.

Yoou can also run water through a hose from some dehumidiers to a sump pump. Disclaimer: "if you going to run it into a sump pump, make sure the sump pump has a closed lid on it so you're not letting the air vapor out," Gallen says, which could pose a smelly problem.

Save energy and money

Determine the temperature at which the unit was tested. most dehumidifiers are tested in 80-degree air, says Dustin Gebers, marketing manager for Frontier Basement Systems in Clarksville Tennessee.

"So, the dehumidifier has to work 10 times harder to pull the (moisture out of the air) because it wasn't designed at that colder temperature," He says. "First step is to find a dehumidifier that is Energy Star-rated that was tested around 70 degrees."

Yacko adds that basements tend to be around 65 degrees; and experts say it's important to find a dehumidifier proven to work well in the cooler temperatures typical of that space.

Shop features for your dehumidifier

Along with automatic draining, some dehumidifier systems come with filters to remove mold spores and dust mites that help protect individuals with allergies and asthma.

Additional featured options include auto restart, which allows the unit to return to desired settings after a power loss, and auto humidistat, which shuts off the unit once the desired relative humiditiy is achieved to save energy.

Plan to spend more than $1,000 on a good dehumidifier

while you can spend a hundred to several thousand dollars on a dehumidifier, most basement experts say price should typically fall somewhere in between

"A good dehumidifier will cost between $1,300 and $2,100, depending on what all you want it do do," Gebers says. He, Yacko and Harrell recommend as their first choice a SaniDry basement dehumidifier, which starts at around $1,600.

Michael Schroeder covers health care and other consumer topics for Angie's List. A senior writer, he joined the organization in 2009.