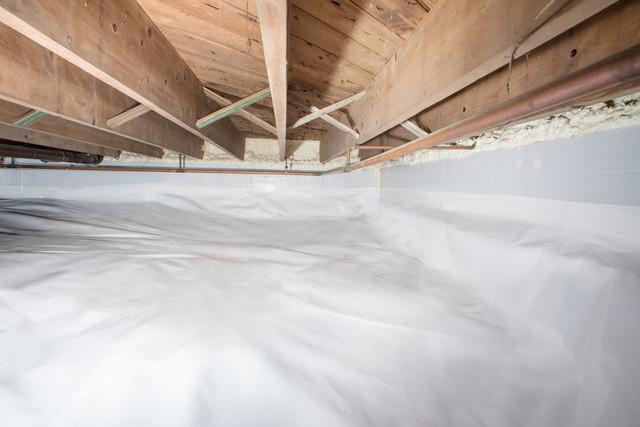 Did you know that up to half of the air in your house could be flowing up from the crawl space? You probably didn’t, because for some strange reason that very important piece of information is not widespread knowledge.

And so people neglect their crawl space. They pay no attention to it whatsoever and the result of that, of course, is that dust and moisture build-up which can cause mildew to grow, allowing the air to become musty and unclean and that’s the air that you and your family end up breathing in.

Take a look at your crawl space right now. It probably looks like a tomb. If you had to spend any significant length of time hanging out down in that miserable place and breathing in that air you would get pretty concerned about your health, wouldn’t you?

Well, that’s what’s circulating in your house right now. And this isn’t your fault because nobody ever told you, but it is a problem that you should be trying to deal with. One of the ways you can do that is by encapsulating your crawl space.

The solution isn’t to start cleaning your crawl space or something because that’s not really a sustainable way to ensure that the air quality is on an acceptable level to be breathing in. It would take forever and you’d have to do it way too often.

So instead what you should do is encapsulate the crawl space, which basically means that you will be creating a division between it and your living space. It’s a pretty big operation but it’s also a very effective one.

There are a few different methods that you can employ here. Many people will go the route of just sealing their crawl space, which is a similar process that serves almost the same process as a full encapsulation.

The process of sealing involves covering the floor of the space and about 8 inches up the inside walls. While this will subdue the moisture and keep insects and rodents at bay, you are not going to entirely prevent the growth of mould and mildew without covering the entire space.

You need to seal up all of the vents and any openings to the outdoors. Add a Vapor Barrier to the floor and the walls and also create a thermal barrier to fully solidify the barrier between the outside world and your crawl space.

And then cap it all off by adding a dehumidifier to the space, to make sure that the humidity level is regulated. A crawl space-specific dehumidifier would probably be a good idea since they are designed specifically for this purpose.

This is a valid question to have because you probably don’t know anybody that has their crawl space encapsulated. Like most people, they haven’t heard about it before and don’t assume that there’s any problem.

And none of your neighbors are dying, right? No one’s health is affected, right? Well, that’s not necessarily the case. It might seem like your untouched crawl space is perfectly safe, but the health problems could be affecting you without you realizing it.

Allergies, sinus infections, even asthma can be caused by mold exposure and in the long-term, it can lead to more serious respiratory problems such as chronic bronchitis or perhaps even lung cancer in some serious cases.

So how do you know if your crawl space is causing problems? Check for a few different signs. Mould could be growing in your living space as a consequence of its presence in the crawl space so look out for that.

Look out for sweating windows, check to see if your insulation is wet and an insect problem is also a good indicator that you may have an overgrowth of mould or mildew that needs to be dealt with.

If you’ve determined that a crawl space encapsulation is necessary for you, what’s the next step?

Well, the best course of action would be for you to hire a professional. It’s not worth trying to encapsulate your own crawl space, because it will take someone inexperienced a long time to finish it and you want to make sure it’s done correctly the first time around.

Trust a professional to ensure not only your home’s safety but your family’s too!

Back to Previous Page
Back to News & Events